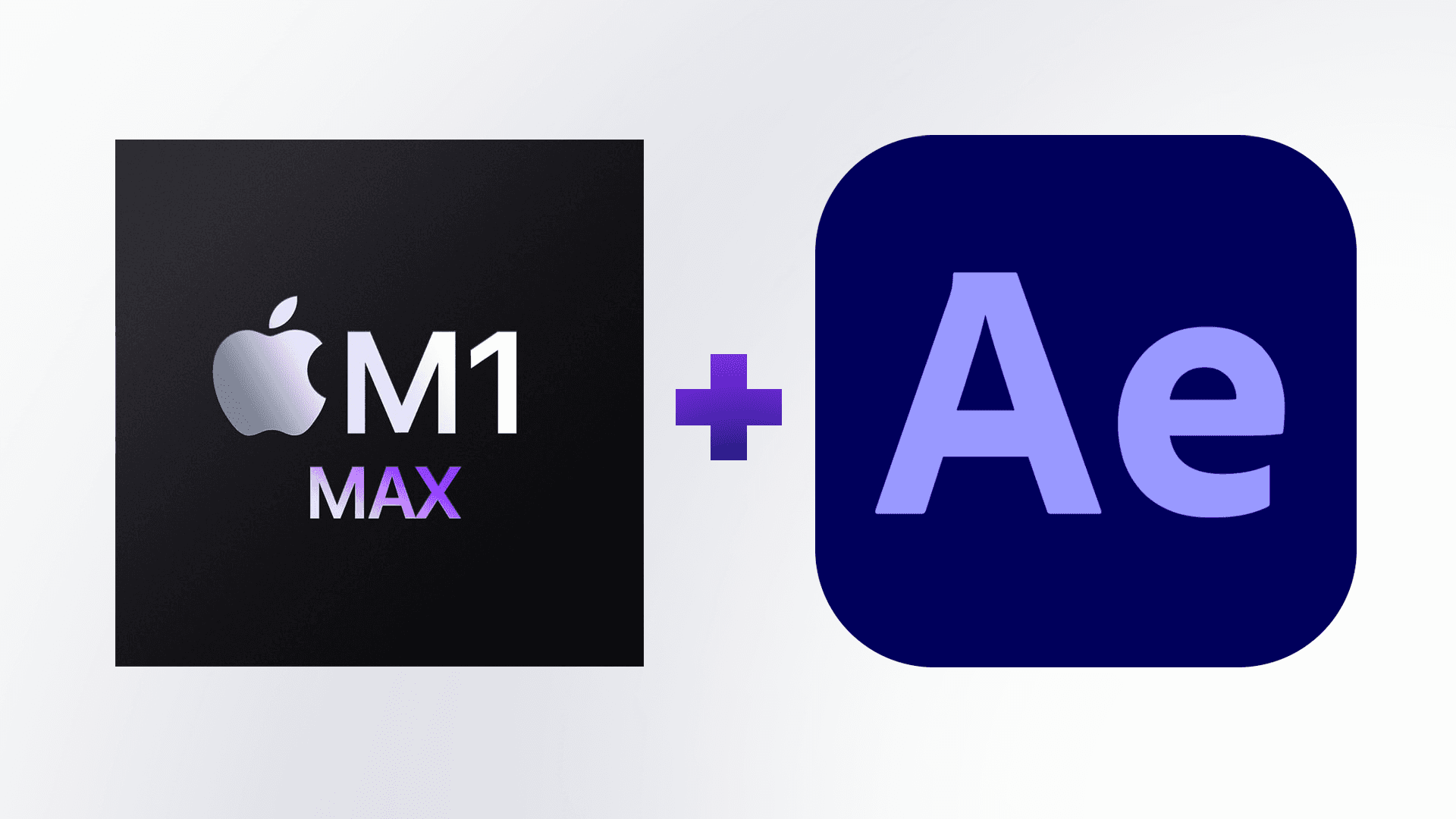 As a motion graphics artist, I’ve been cautiously optimistic about performance increases with After Effects—an app my freelance business depends on daily.

I started my freelance business with a 2015 MacBook Pro, and as I needed more and more power, I moved to a 5K iMac, which has been my main workhorse since 2017. At the beginning of 2020, I upgraded my MacBook Pro to the 16” i9 Model, thinking it may match or beat out my 2017 iMac. But it turned out the iMac was always quite a bit faster on real-world projects, even though Geekbench and other performance tests showed otherwise. I had considered testing an M1 Mac Mini, but didn’t want to take on many of the tradeoffs with a first-gen chip.

Then Apple announced the new M1 Pro and M1 Max chips, loads of ambitious claims and I wondered how my current projects could benefit. Fast forward to launch day and my local Apple Store had all of the configurations in stock, so I ran over to pick up a Space Gray 16” MacBook Pro with the M1 Max, 64GB of ram and 4TB of storage. Would this be a different story than the last time I got a laptop to perform as a desktop?

The new M1 Pro and M1 Max arrivals also coincided with Adobe’s Max event, with new 2022 versions of all of their apps. And to my surprise, all apps are now M1-native—except for After Effects, which would run under Rosetta 2. And as soon as I finished installing it, I saw that Adobe had also announced a new public beta which is M1-native. Now with everything installed, it was time to start testing.

I wanted to get a good baseline test render using my iMac. One thing I didn’t realize though was how fast After Effects 2022 would render projects compared to After Effects 2021, thanks to the new multi-frame rendering, which had been missing since around 2014.

With the new multi-frame rendering, it shaved off around 4 minutes from the render time! While already impressed with After Effects, it was time to start testing my new M1 Max. This is when my mind was absolutely blown! 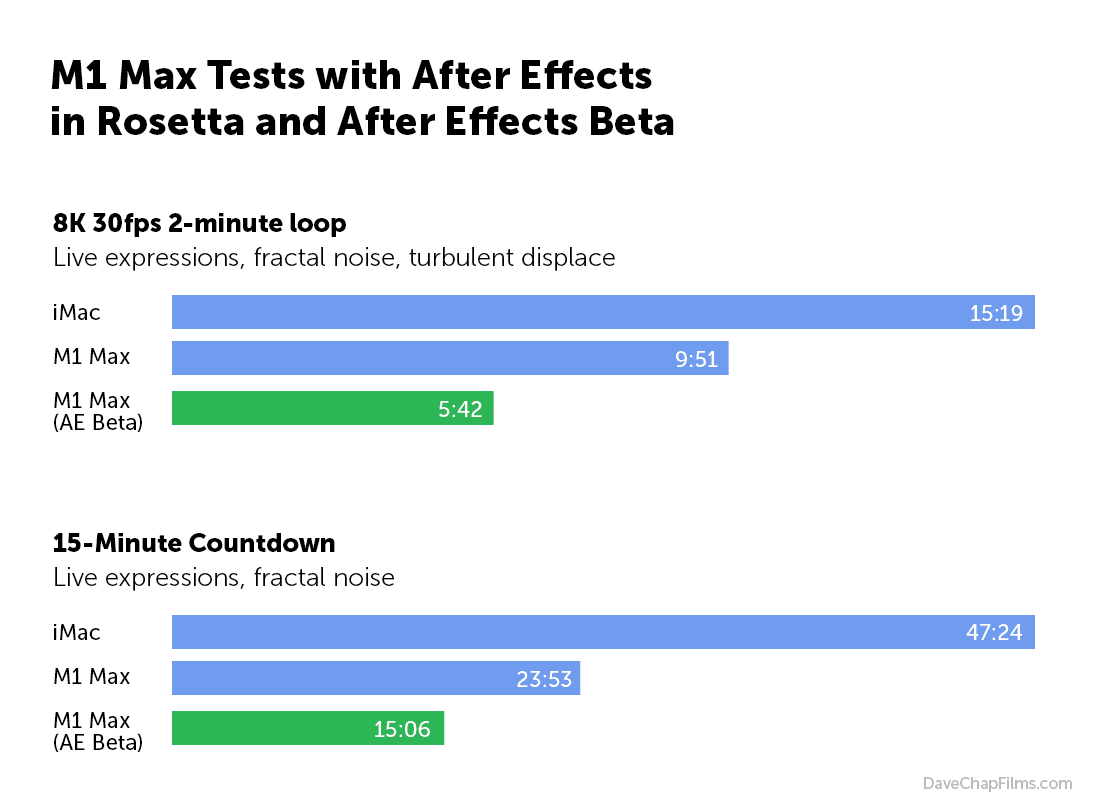 This is the first time I’ve been blown away by render speeds—at least in a very long time. I’ve never been able to get a new machine that cuts my render times by 3X, without spending over $10k. And this is a laptop!

I was hoping for a performance increase from my iMac, but I didn’t realize it would be this drastic. The rest of my workflow includes Final Cut Pro, DaVinci Resolve and the rest of the Adobe apps, and all are native and run better than I’ve ever experienced.

The After Effects Beta is currently limited, with some features unavailable for now. But many of those features I don’t use at all or very rarely, and that’s where the Rosetta version will fill in the gap for me.

What about third-party plugins?

This was also a huge concern for me, since I do rely on Red Giant’s (or is it Maxon’s?) Trapcode suite as well as Video Copilot’s Element 3D. And these don’t work at all in the After Effects Beta, but seem to work normally in the Rosetta version. Element 3D isn’t fully compatible on the M1 yet, and it appears that any of the ray-tracing options (mainly shadows and ambient occlusion) render abnormally. Switching these to shadow mapping solve the issue for now. My hope is that Andrew Kramer and his team release a new M1 compatible version with all those new features he teased a few years ago.

For more information on the After Effects Beta, click here

Toolfarm also has a great M1 compatibility page that they continue to keep updated.

I’m pretty confident that Red Giant will have native support sooner than later, at least if past experience is any indicator. The Maxon acquisition seems to have changed a lot of the culture from an outsider looking in, and I miss the blog and openness Red Giant used to have online. They ultimately want everyone on their Maxon One subscription, and with M1 compatibility with Cinema 4D and Redshift, Red Giant products can’t be that far away.

I’m going to continue testing as I begin using this new MacBook Pro for all my client work. I’ll be sharing new insights as I switch over to the M1.